A Brief History of Friday Hill 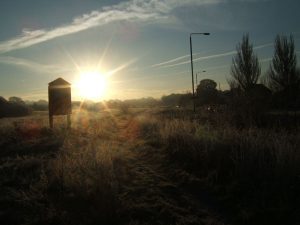 There have been various suggestions for the origin of the name Chingford. Most agree that it was near a ford over the river Lea, which explains the ‘ford’ . The most plausible explanations for ‘Ching’ are:

Old English for King – Shingle as used in the Middle Ages – Saxon for stumps of wood, some evidence of ancient wooden dwellings have been found in the area.

Chingford (written as Cinghefoir) is mentioned in the Domesday Book as two manors and scattered peasant dwellings in Epping Forest. Chingford only began to grow rapidly after the railway arrived in 1873.

It is home to Queen Elizabeth’s Hunting Lodge. Originally called the Great Standing it was built for King Henry VIII of England in 1543. It was used as a grandstand to watch the hunting of deer on Chingford Plains.

A granite obelisk at Pole Hill was erected in 1824 under the direction of the Astronomer Royal, the Rev. John Pond M.A., to mark true north for the Royal Observatory based at Greenwich. It was placed on high ground along the line of the Greenwich Meridian so it could be seen and used as a reference point for the observatory. Its location was later recalculated in the 19th century where the obelisk was deemed to have been erected 19 feet west of the true meridian line.

Chingford has until recently been home to one of London’s great attractions, Walthamstow Stadium. “The Stow” dog-track was built in 1933 by William Chandler, a street-corner bookmaker and had been owned by his family until its sale in 2008 to property developers.

The Kray Twins are buried in Chingford cemetery.

The footballer David Beckham grew up in Chingford. He attended Chingford School and played football for Ridgeway Rovers.

The Apple Mac Designer of the iPod Jonathan Ive was born and lived in Chingford in his early days.

Lawrence of Arabia once owned a considerable amount of land on the western side of Pole Hill He built himself a small hut there in which he lived for several years. The hut was demolished in 1930.

Friday Hill takes its name from a John Friday who owned the land in the fifteenth century. Before this the hill was known as Jackatt Hill.

Friday Hill House was built in 1839 by Robert Boothby Heathcote, who was both the lord of the manor and rector of the local church. He also paid for the building of the church of St Peter and St Paul in Chingford. This building replaced a Jacobean house (built 1608) that was on the site, The Manor House had farmland of 160 acres.

Louisa Boothby Heathcote (1854-1940) was the last resident of the house. After the 2nd World War (1939-1945) the estate was sold to London County Council who built the housing estate. The house is used for Adult and Community Education and is a Grade II listed building. It was put up for sale in 2012 by London Borough of Waltham Forest and was bought by developers who have now started work on the site.

This Tudor style dovecote dates from the sixteenth century. At that time, pigeons were kept and fattened up for eating. The dovecote, which had nesting space for 250 birds, belonged to Pimp Hall (Originally Pympe’s Hall), one of three manor houses around Chingford. In 1838 the estate was taken over and became part of the Chingford Earls estate.

The farmhouse associated with it survived until just before World War II. This dovecote is depicted in the Mosaic at Chingford Assembly Hall It is the fourth down on the left hand side.

There is a local legend telling how on one occasion Charles II was out hunting in Epping Forest and was caught in a snowstorm. He took shelter in Pimp Hall and was so delighted with the food offered him that he drew his sword and knighted the joint of beef declaring that it was now Sir Loin which later became the name of the nearby pub. The current pub The Sirloin was originally called Little Friday Hill House before the estate was sold. The pub has recently been renamed and is now called The Dovecote.

9am to 5pm, Monday to Friday

Out of Hours Emergencies:

© 2020 – 2022 Friday Hill TMO
We use cookies on our website to give you the most relevant experience by remembering your preferences and repeat visits. By clicking “Accept”, you consent to the use of ALL the cookies.

This website uses cookies to improve your experience while you navigate through the website. Out of these, the cookies that are categorized as necessary are stored on your browser as they are essential for the working of basic functionalities of the website. We also use third-party cookies that help us analyze and understand how you use this website. These cookies will be stored in your browser only with your consent. You also have the option to opt-out of these cookies. But opting out of some of these cookies may affect your browsing experience.
Necessary Always Enabled
Necessary cookies are absolutely essential for the website to function properly. These cookies ensure basic functionalities and security features of the website, anonymously.
Functional
Functional cookies help to perform certain functionalities like sharing the content of the website on social media platforms, collect feedbacks, and other third-party features.
Performance
Performance cookies are used to understand and analyze the key performance indexes of the website which helps in delivering a better user experience for the visitors.
Analytics
Analytical cookies are used to understand how visitors interact with the website. These cookies help provide information on metrics the number of visitors, bounce rate, traffic source, etc.
Advertisement
Advertisement cookies are used to provide visitors with relevant ads and marketing campaigns. These cookies track visitors across websites and collect information to provide customized ads.
Others
Other uncategorized cookies are those that are being analyzed and have not been classified into a category as yet.
SAVE & ACCEPT